Euphoria has sent Bitcoin to unreal levels over the past few weeks then followed by a plunge of over 25%  in 24 hours from its high of almost $20,000 last week. The cumulative value of all cryptocurrencies throughout the world are estimated to be more than $300 billion, an enormous increase from the $18 billion at the beginning of the year. 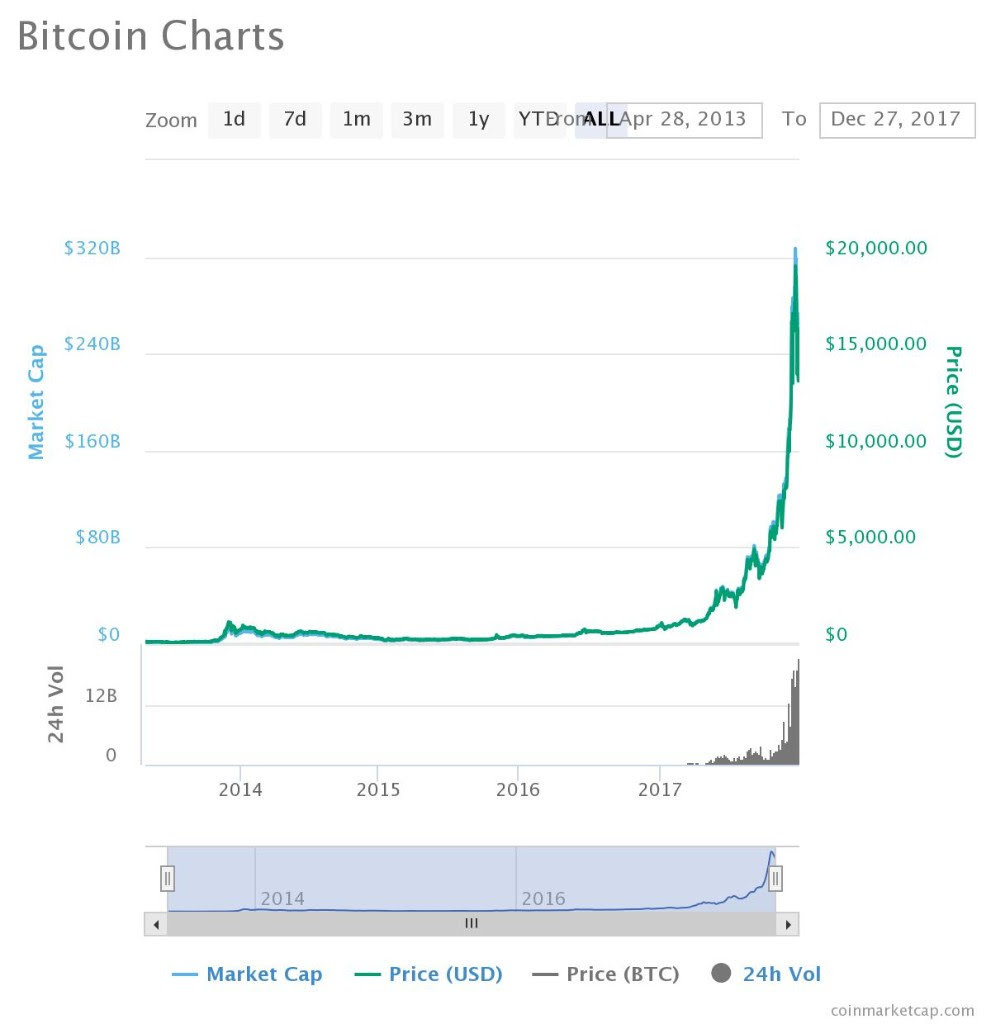 The commodity futures trading commission granted the Chicago Board Options Exchange (CBOE) to issue Bitcoin futures which will allow traders to bet on the price of the digital currency via a trusted exchange. Traders will be allowed to bet on the appreciation of the cryptocurrency, or the demise of it by buying and selling the futures.

What took the equity markets decades to establish, the cryptocurrencies market is trying to build in mere months. Bitcoins emerged in 2008 designed by a programmer or group of programmers under the name of Nakamoto, whose real identity remains unknown. New Bitcoins can only be created by solving complex math problems embedded in the currency, keeping total growth limited.

Digital currencies are being examined as a store of value and a method of making monetary payments. Gold, an accepted store of value, and currencies issued by countries, have been established internationally for centuries and are and now challenged by the cyptocurrency concept.

One factor driving Bitcoin's growth has been the emergence of a broader cryptocurrency ecosystem. Bitcoin serves as the reserve currency for the cryptocurrency economy in much the same way that the dollar serves as the main anchor currency for international trade. Bitcoin has been recognized as the first truly decentralized electronic payment network.

A looming regulatory crackdown is affecting the digital currency as well. Bitcoin has already been hit by a crackdown from Chinese officials who have been severely restricting the use of cryptocurrencies. In the United States, there's little risk of a direct crackdown on Bitcoin, but there's a real risk that the Securities and Exchange Commission will crack down on the ICOs (Initial Coin Offerings) that have pushed Bitcoin's price upward. An unregulated means by which funds are raised for new crypto currency bench, ICOs are used by startups to bypass the rigorous and highly regulated capital raising environment.

Bitcoins exist as software, not physical currency, and are not regulated by any country or banking authority. Even though U.S. Senate hearings disclosed that Bitcoin could be a means of exchange, it gave no assurance that it would actually become an accepted medium of exchange. Government regulations would need to be created and then enforced in order for Bitcoin to become accepted by other government entities. The currency can be traded without being tracked, thus raising the potential for illicit activity, such as involving weapons, drugs, and prostitution. Even though Bitcoins are not illegal, it is not legally recognized by governments as a currency.

Some believe that the price appreciation of Bitcoin has been solely a result of speculation and hasn’t yet been used as a store of value or as a medium of exchange to any extent. Some compare Bitcoin to the tulip craze in Holland of 1637, when speculators pushed the price of tulip bulbs to incredible levels, followed then by a collapse in the tulip bulb market. Bitcoin has also surged on speculation that perhaps one day digital money will eventually become a legitimate global currency and even replacing currencies from certain countries.

Bitcoins are mined by powerful computers that calculate complex, mathematical functions. Total Bitcoin quantity is capped at 21 million and currently there are about 12.4 million that exist worldwide.

The growing mobile payment industry could be a big benefactor to the acceptance of Bitcoin as new and creative applications are being devised to accept digital currency. Bitcoin transactions are very popular among mobile users, where rather than using a credit card or cash to make a purchase, all you need is your phone.

In 2014, the value of Bitcoins fell by over fifty percent following remarks by China and Norway to not recognize the digital currency as legal tender. The government of Norway ruled that Bitcoin does not qualify as real currency but rather qualifies as an asset, producing taxable capital gains. Norway said that Bitcoins don’t fall under the normal definition of money or currency.

More and more nations have been taking an official stance as the popularity of Bitcoins has evolved. The European Banking Authority has warned about the risks of trading digital money and subject to losses where consumers are not protected by any government entity or authority.

As digital currency evolves, some believe that it will eventually be accepted as a legitimate currency. But for the time being, others believe that its time hasn’t arrived yet. Various studies have recently emerged with different opinions, such as a Stern School of Business study conducted by David Yermack, which concluded that Bitcoin behaves more like a speculative investment than a currency and has no currency attributes at all. So think twice before investing in something so volatile and unregulated.

If you need assistance creating a financial plan or with investment management, I encourage you to contact me to make an appointment for a consultation to see how I might be able to help you.

Shoot me an email at Luis@buildabetterfinancialfuture.com, and let’s get started on achieving your financial goals together.

Luis Rosa CFP® EA is the founder of Build a Better Financial Future, LLC. He has been in the financial services industry since he graduated college in 2001. Luis focuses on working with young up and coming professionals who are looking to better position themselves for a successful financial future. In addition to obtaining his securities registrations Series 6, 7, 63, and 66, Luis is also a CERTIFIED FINANCIAL PLANNER™ professional and is enrolled to practice before the IRS. This diverse industry knowledge allows him to best serve his clients by understanding how one financial decision affects the other, allowing him to better guide them toward achieving their goals. To meet and see how Luis may be able to help, contact Luis directly at Luis@buildabetterfinancialfuture.com.